Impressions of some great OOH across the globe 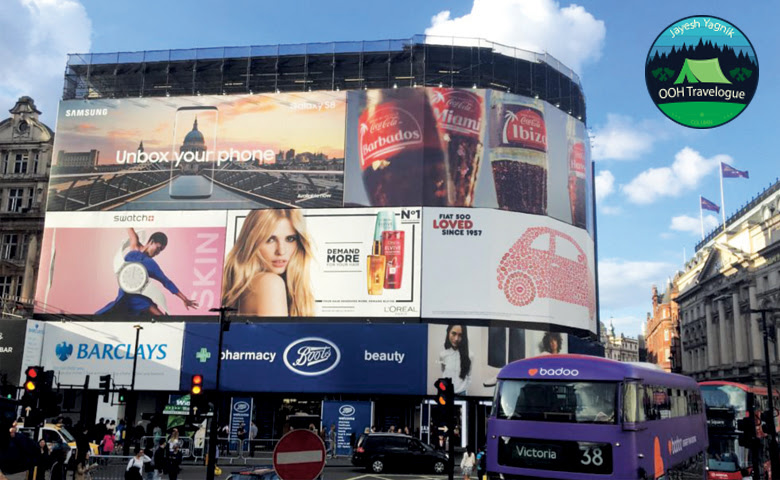 In this new section called OOH Travelogue, we bring you a series of articles by industry professionals wherein they recollect their travels and share some of their most memorable OOH impressions and experiences from across the globe. In the first in this series, we have Jayesh Yagnik, CEO, MOMS Outdoor Media, penning down his thoughts on some of the best OOH he has encountered during this travels. Read on.. When I recently asked an avid international traveller friend about his trip to the ‘Big Apple ’ (New York) and what struck him most about the city, even as I contemplated my own obvious answer, he quipped, “Time Square”.

I was a tad bit stunned because that was exactly what was on my mind and expectedly so, given my industry background. But coming from a layman / non-industry person, it was a surprise, though a pleasant one at that.

It got me so intrigued that I asked him further, “What about Time Square ?”. To which he replied, “The colourful, evolving, shape changing screens all around; no wonder the city is also known as “a city that never sleeps”.

To us industry people, Time Square is definitely one of the Sanctum Sanctorum of magnificent digitisation, like  the humongous Burj Khalifa, which boasts of lacs of sqft of mapping platform.

Before Covid hit the world, I too had my fair share of travels and the hardcore OOH person inside me was all the time looking out for new techniques and new methods that the rest of the world was adopting . But my tryst with impressionable outdoor was way back in 2012 when I had gone to USA and I specifically recall Miami from that trip.

When we think about Miami Beach, we picture  the good life -  the upbeat music , the sunbathing crowd waiting to party at night, etc. But amidst all that chaos, I discovered a very unique way of advertising . In fact, it was during that visit to Miami way back then when I first experienced the concept of hyperlocal in close quarters, although it was in 2020 when the word ‘hyperlocal’ was most used and abused.

Back to Miami,  picture this - an aircraft flying low, projecting a colourful banner across the sky over the beach delivering information on which party is happening at what club. The message was crisp, the target audience on point, the frequency just about right, and there was nil spill over! What better way to advertise while being hyperlocal! The next on my list and which attracted me was something very unique, something  I had not seen back home.  The treatment of the media was very new and very different and I’m talking about street furniture .

In European countries, unlike in India, travelling by buses or subways has nothing to do with one’s social or economic profile; it is just a quick means of getting transported from one point to the other. Hence the utilisation of street furniture by brands is also different . From luxury to FMCG brands, everyone advertises on them without any distinction or discrimination. At times, such media is also interactive and supported by virtual reality mechanics, making them even more appealing .The upkeep and maintenance of the media is also a class apart and I wish in India too we could adapt to this soon, because the opportunities are endless.

Across Europe the concept of wall wraps is also very strong. Be it the architecture which enhances the medium, or the colossal wall murals themselves, the entire continent is an outdoor delight . Discussing Europe and not touch-basing London’s Piccadilly would be a major omission, and I made it a point to see it at least once during my break from the infamous India Pakistan Match during the Champions Trophy in 2017. Known for its video walls and neon signages, I must say it was a looker !

Closer home , South East Asia boasts of outdoor which is clutter free. Structural aesthetics is the USP there. It feels wrong  to restrict them to sizes -  they are mammoth display canvases. In fact, they look like huge pieces of art, which automatically bring out the premiumness of the product advertised, without even having to try much! This also goes well with the city landscaping and aesthetics.

I would like to believe that the new India that we are in is moving towards the choice of quality over quantity and that our outdoor landscape too is embracing this change for the better . Let’s do some quality advertising together...