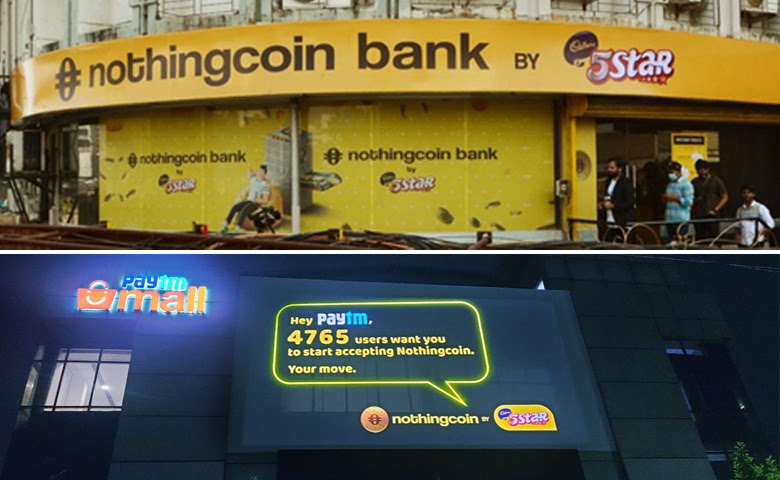 The brand has launched a unique new activation with the ‘NothingCoin’ currency , an extension of its ‘Do Nothing’ proposition’ and partners with Paytm and Reliance JioMart for customers to redeem their earned NothingCoins.

One of Mondelez India’s iconic brands, Cadbury 5 Star is back with a refreshing campaign that extends its ‘Do Nothing’ proposition. Taking another step ahead, the brand has launched NothingCoin, a new form of currency that gets mined while you do nothing. With no expensive hardware or large investments needed, NothingCoin challenges the traditional notion of how only hard work helps people earn.

Speaking about the campaign, Anil Viswanathan, Senior Director – Marketing, Mondelez India, said, “Gen Z today is in a constant hustle mode list – right from balancing their studies, finding a job, having an active social life to worrying about their investment plans. We truly feel they deserve some downtime and perhaps a much-needed digital detox. As a brand that has been at the heart of our country’s youth culture through innovative campaigns and quirky narratives, the introduction of NothingCoin is our attempt to inspire them to take a break in the most engaging and rewarding manner. This campaign reiterates Cadbury 5 Star’s brand persona of being witty and speaking in a language that excites the youth.”

In this latest communication, the brand is talking to today’s youth who are digital natives, and in a quirky way promotes the idea of moving away from the stressors of life, enjoying some downtime, and spending- time doing nothing; all while rewarding and letting them earn.

The idea of the activation is that consumers can mine this coin by buying a Cadbury 5 Star, scanning the QR code, and logging onto the NothingCoin mining website. After following basic steps, the consumer must do nothing and keep his phone aside to let the website mine NothingCoins for them. On mining coins, the consumer can redeem exciting offers in from the Cadbury 5 Star online mall linked with the website which has products from Souled Store or they can even redeem the coins for JioMart vouchers.

“NothingCoin is an innovative engagement idea that’s witty, catchy and fun, just how a 5 Star idea should be. For the always-on generation, 5 Star’s NothingCoin is a smarter way to take a much-needed digital break, do nothing and yet get rewarded. And what made the idea zanier was opening an actual bank which encouraged people to mine NothingCoins by simply doing nothing,” says Sukesh Nayak, Chief Creative Officer, Ogilvy India, speaking about the campaign.

The launch of this one-of-its-kind currency will be supported by a 360-degree integrated marketing communication, including digital films, innovative outdoor, and influencer-led activation. As part of the outdoor activation, the brand has taken a spin on traditional bank setups and built a branch at Nariman Point in Mumbai wherein consumers can visit this bank, grab a Cadbury 5 Star, sit, and do nothing to mine more Nothing coins on our website. The bank has a loans counter, an ATM and investment schemes with quirky messages that ask the consumer to do nothing.

“The NothingCoin is a very special project for us. It is an indigenous tech-based idea and an outcome of brilliant teamwork between Wavemaker and our partners at Ogilvy. This is a journey, in the past, our team has also cracked the industry-first #DoNothing Assistant, activated on Google Assistant. This time we wanted to take #DoNothing to the next level with another seamless integration of technology and creativity & reward the millions of 5 Star consumers. We didn’t just stop at creating a virtual destination for mining of #NothingCoins, but also a physical location in the form of the #NothingCoin Bank, which is open for everyone to experience and of course, earn by #DoingNothing,” said Shekhar Banerjee, Chief Client Officer & Office Head, West.

The brand then went a step further and did an online poll with the youth on where they would like to spend their NothingCoins - Paytm won the Instapoll.

To get Paytm’s attention, 5 Star projected a funny banter message on PayTM’s Noida office which resulted in Paytm playing along and announcing that they’ve decided to start accepting NothingCoin too.